U. S. Departnlent of Justice National Institute of Corrections A Practitioner's Guide to Treating the Incarcerated Male Sex Offender

When convicted sex offenders reenter society, they are much more likely than any other type of offender to be rearrested for a new rape or sexual assault. See Sex Offenses 27; U.S. Dept. of Justice, Bureau of Justice Statistics, Recidivism of Prisoners Released in 1983, p. 6 (1997). States thus have a vital interest in rehabilitating convicted sex offenders.

Therapists and correctional officers widely agree that clinical rehabilitative programs can enable sex offenders to manage their impulses and in this way reduce recidivism. See U.S. Dept. of Justice, Nat. Institute of Corrections, A Practitioner’s Guide to Treating the Incarcerated Male Sex Offender xiii (1988) (“[T]he rate of recidivism of treated sex offenders is fairly consistently estimated to be around 15%,” whereas the rate of recidivism of untreated offenders has been estimated to be as high as 80%. “Even if both of these figures are exaggerated, there would still be a significant difference between treated and untreated individuals”). An important component of those rehabilitation programs requires participants to confront their past and accept responsibility for their misconduct. Id., at 73. “Denial is generally regarded as a main impediment to successful therapy,” and “[t]herapists depend on offenders’ truthful descriptions of events leading to past offences in order to determine which behaviours need to be targeted in therapy.” H. Barbaree, Denial and Minimization Among Sex Offenders: Assessment and Treatment Outcome, 3 Forum on Corrections Research, No. 4, p. 30 (1991). Research indicates that offenders who deny all allegations of sexual abuse are three times more likely to fail in treatment than those who admit even partial complicity. See B. Maletzky & K. McGovern, Treating the Sexual Offender 253—255 (1991). ..MCKUNE V. LILE (00-1187) 536 U.S. 24 (2002).. 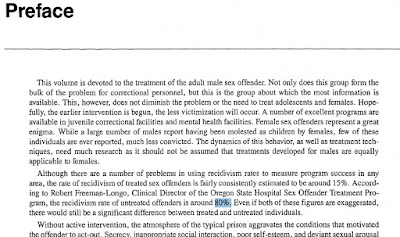 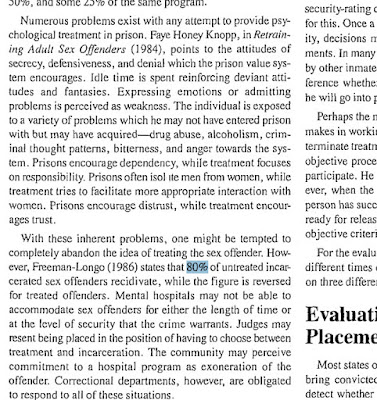 Labels: Before and After, Registries

EXECUTIVE SUMMARY
The purpose of this study was to examine the effectiveness of one state’s sex offender registration and notification policy in reducing sexual violence. The problem of sexual violence is a national legislative priority as evidenced by numerous sex offender-specific policies enacted at the federal level over the past
15 years. Specifics vary among states regarding criminal justice responses to sex offending, but all such policies have as their primary goals the prevention of sexual violence and the reduction of sexual re-offending.

Of note, the present study focused almost exclusively on the effects of registration and notification as pertains to offenses committed by adults. Given that registration and notification policies often target juveniles adjudicated delinquent as minors, the investigative team has been involved in separate research pertaining to the effects of these policies as pertains to juveniles (see Letourneau & Armstrong, 2008, Letourneau, Bandyopadhyay, Armstrong, & Sinha, 2010; Letourneau, Bandyopadhyay, Sinha, & Armstrong, 2009a; 2009b).

Specific Aims
This study examined whether the introduction of sex offender registration and notification laws in South Carolina were associated with reductions in sexual crimes and, if so, whether this reduction could be attributed to an actual reduction in sexual violence and/or recidivism (i.e., an intended effect) or to changes in criminal judicial processing of individuals or registry crimes (i.e., an unintended effect). In the context of this project, “sex offender” typically refers to anyone with one or more sex crime convictions. Specific sex crime charges are listed in Table 1 and include contact and noncontact offenses against children and adults.


Key findings of the study:
Conclusions
Results from this program of research indicate that SORN, as implemented in South Carolina, appears to have a positive impact on general deterrence associated with averting approximately three new first-time sex crime cases per month. However, South Carolina’s SORN policy has no effect on deterring the risk of sexual recidivism. South Carolina’s SORN policy does exert unintended effects on judicial decision making with respect to adult sex crime cases. An increased number of defendants were permitted to plead to nonsex charges following the onset of South Carolina’s SORN policy and following its modification to require online notification. The net effects of this change could be to reduce community safety by increasing the likelihood that defendants guilty of sex crimes pleaded to nonsex crimes or were aquitted altogether.

Finally, it does not appear that registered sex offenders who failure to register are more sexually dangerous than compliant registrants. 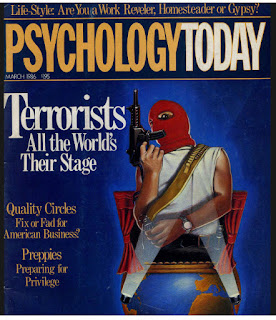 This Psychology Today article has been ERRONEOUSLY pointed out as causing a problem in the 2003 U.S. Sup court case (Smith v Doe) by a "High Recidivism" comment. That high court case was already in trouble because of a "misquote" of recidivism stats in that case: see: Special Report: Misquoting of Prentky's 1997 Long Term Recidivism Study: Affecting a MAJOR US Supreme Court Decision.

“I actually met with a group of people in New Jersey and sat across from Megan Kanka’s grandfather,” Longo said.

The 1994 murder of 7-year-old Kanka gave rise to the public disclosure of sexual offender registries through what are commonly known as Megan’s laws.

“I told the grandfather of the young girl, Megan Kanka, who was raped and murdered, that I appreciate what happened to his granddaughter but this law is not going to make people safe,” Longo added. “Those laws did nothing. It didn’t prevent anything.”

That has not stopped an article he co-wrote in Psychology Today 30 years ago (Mar 1986 see cover of article) from being used to uphold and provide evidence for the “public’s need” for the registries.

Email ThisBlogThis!Share to TwitterShare to FacebookShare to Pinterest
Older Posts Home
Subscribe to: Posts (Atom)
Blog Purpose: To document relevant Truths and supporting them with Authority, then also reveal Factoids, things that do not appear to have any support. This will be available to everyone. For more see Blog Overview. See Privacy, Copyright and Mission for those issues. Thanks eAdvocate.
Our Commenting Policy ---///--- Our Blog Tips